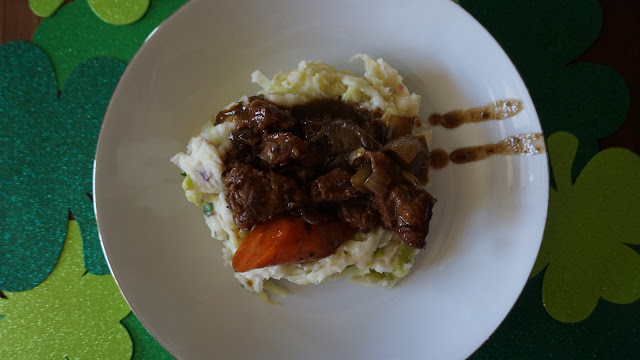 Top of the mornin' to you! It's St. Patrick's Day! It's the perfect excuse to make corned beef and cabbage. Mostly, because it's the only time I can find corned beef. I love corned beef and cabbage so much that when it's available I will buy an extra one for the freezer. However, this year I bought a corned beef, froze it, and decided to make a Beer Braised Irish Stew with Colcannon instead. 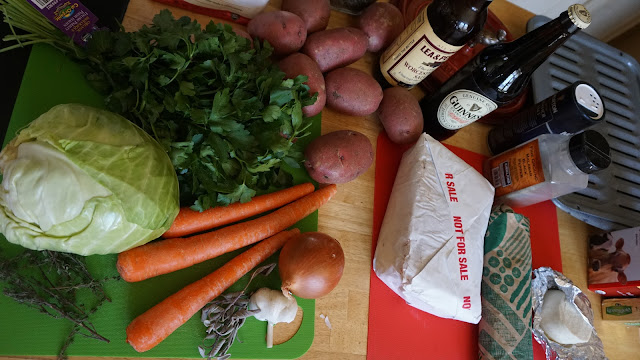 Now this. This can be eaten all year long. No waiting for special cuts of beef or ingredients that are seasonal. I will keep my corned beef for another day. But today we're hungry for colcannon and Irish Stew. 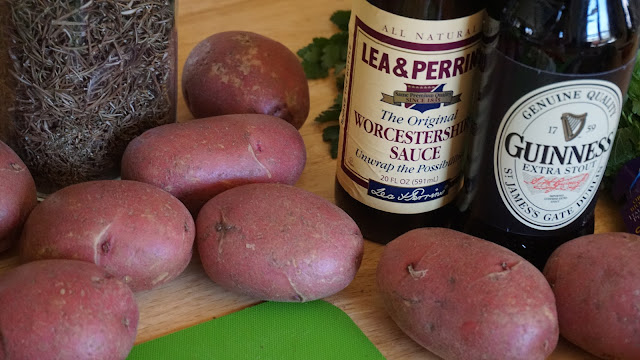 I'm told that Guinness isn't the same here in these United States, as it is in Ireland. Alas, I have never been to Ireland, so I wouldn't know. I will say that Kevin is a stout drinker. Colorado provides many choices when it comes to beer and Guinness isn't his first choice. However in the spirit of all things Irish, today I choose to use Guinness. It's not a bad choice! 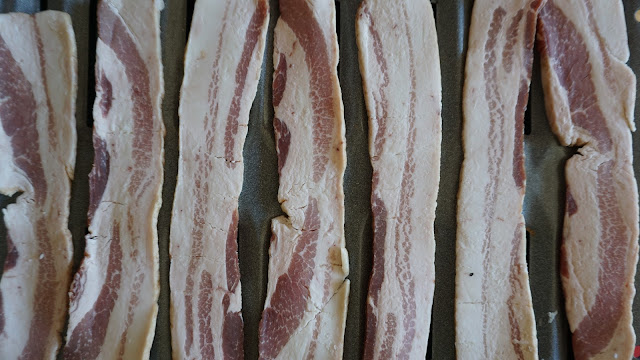 I bake my bacon. It's ridiculously easy. It doesn't demand my attention, and clean-up is a breeze. I use a broiler pan that catches the grease in the bottom pan. I have also used wire racks on a cookie sheet. Make sure the slices aren't touching each other. Pop it into a 400 degree oven for 30 minutes. It will be crisp. That's perfect. Now, start the stew. 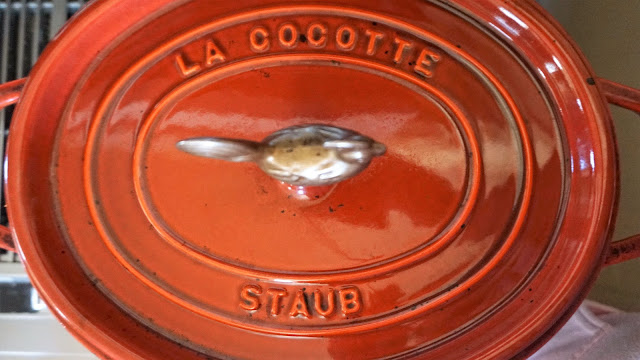 Choose a nice heavy pot. One that the beef can be browned in on the stovetop and then moved to the oven to braise. 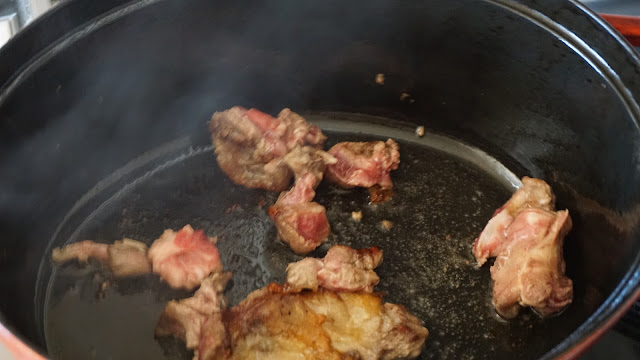 Trim the fat from your roast. Render it to use for browning the beef. For a special treat, I chop up and feed the "meat" that's left after rendering to my boys. 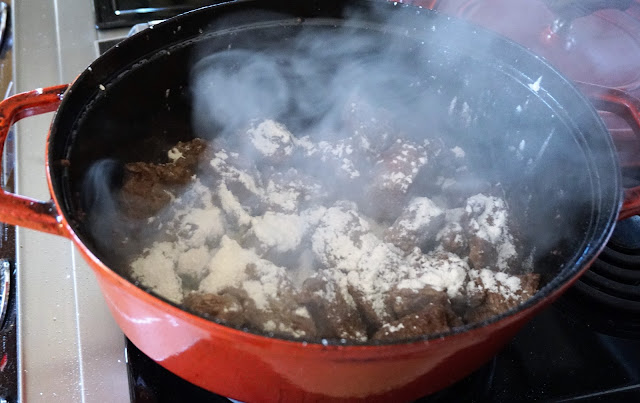 Chop the roast into large chunks. Brown on all sides in the rendered fat. Then, coat all sides with flour. 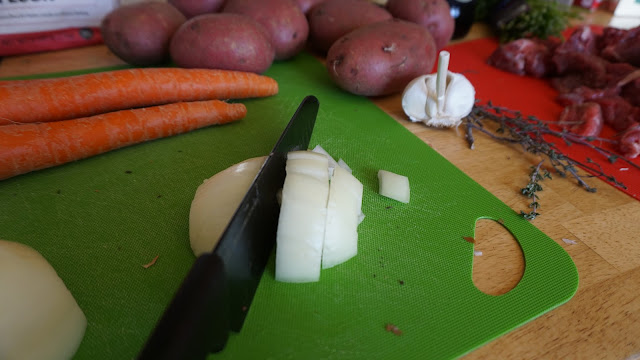 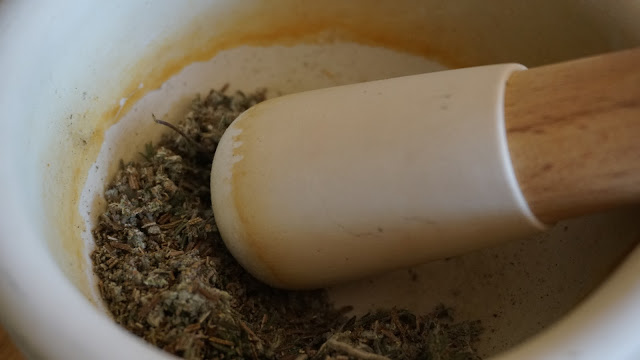 Grind together rosemary, thyme, and sage. 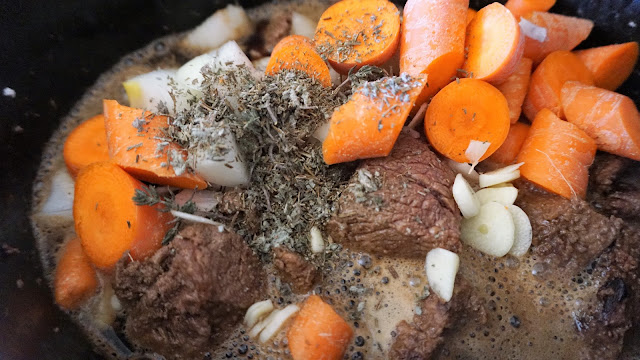 Add them to the stew meat. Sprinkle with salt and pepper. 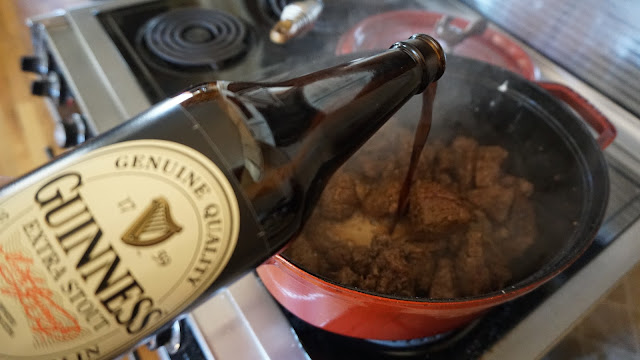 Pour in beer and worcestershire sauce. 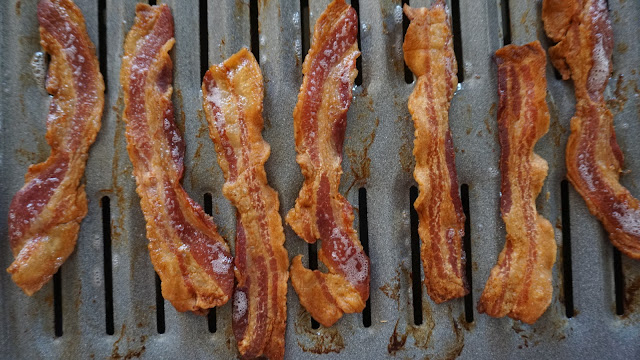 Cover and place in 325 degree oven. Take the bacon out of the oven. 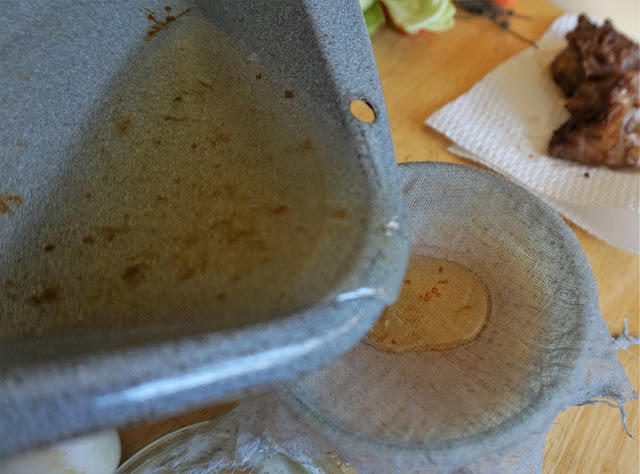 I use a cheesecloth to strain my bacon grease. 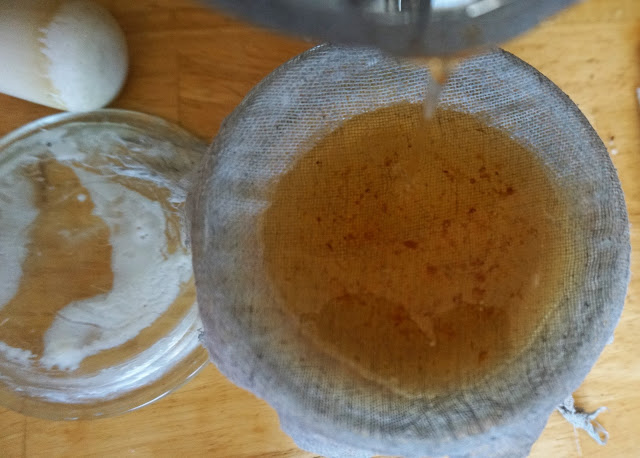 Bacon fat makes fried potatoes taste delicious. I also use it for fried eggs. Store in the refrigerator. 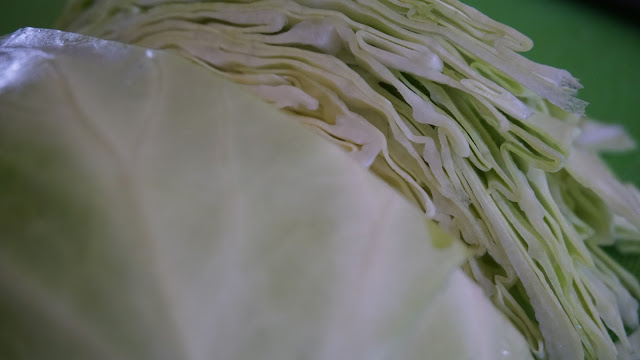 Shred cabbage. (This would be delicious fried in bacon grease, but we'll have to save that for another time.) 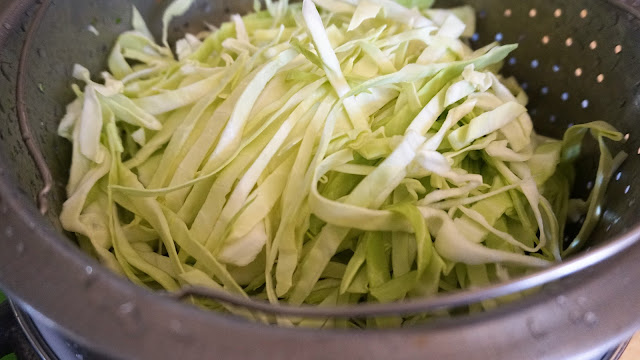 Steam for thirty minutes, or until wilted. (Next time I make this, I will fry it in bacon grease instead of steaming it.) 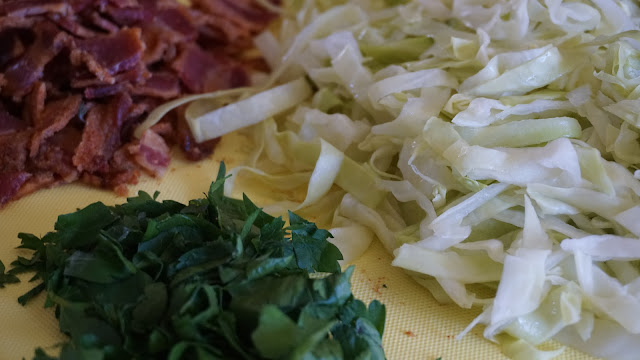 Chop bacon and parsley. Set aside. 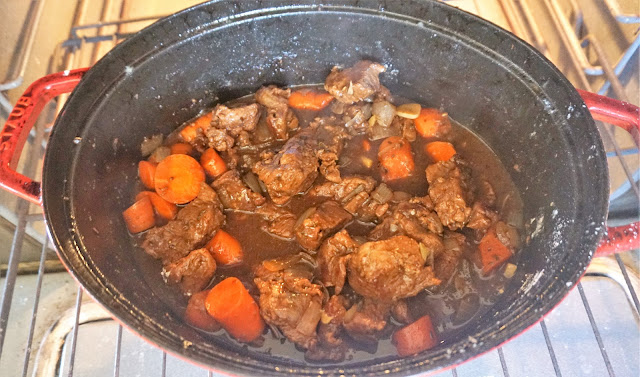 After an hour, check the stew. Stir, re-cover, and place it back in the oven for another half an hour. 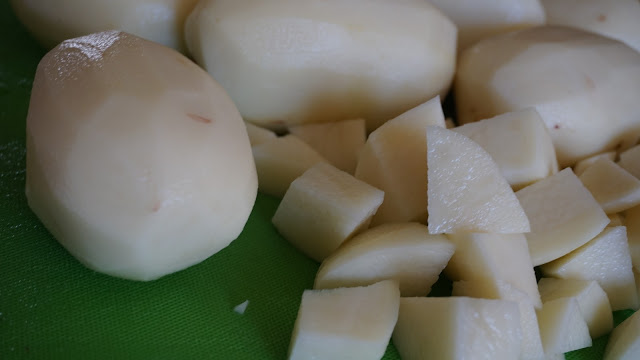 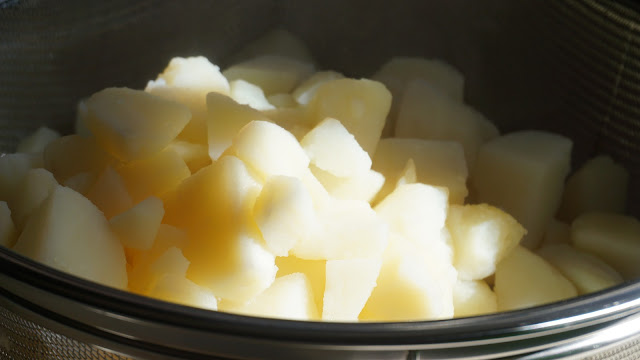 Boil the potatoes until fork-soft, half an hour to forty-five minutes. My cabbage was finished at this point, so I used the same pot to boil my potatoes. Drain potatoes. 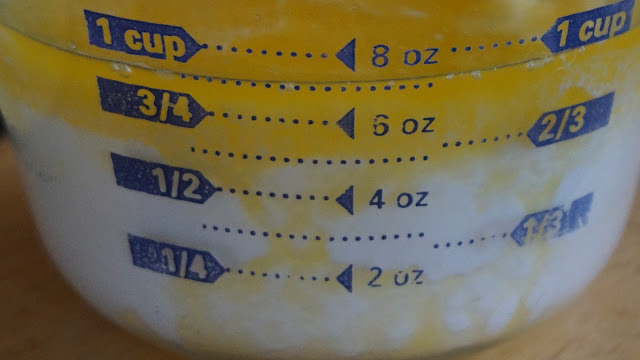 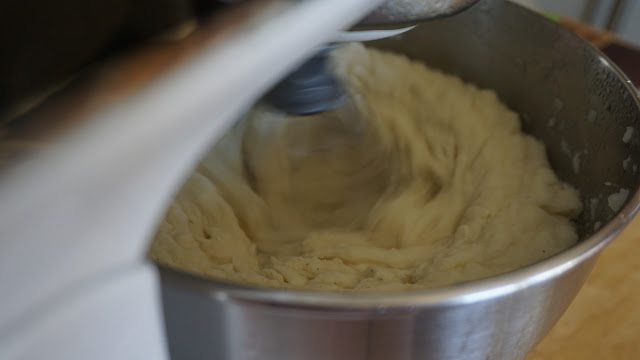 Add it to the potatoes. Whip those taters up. 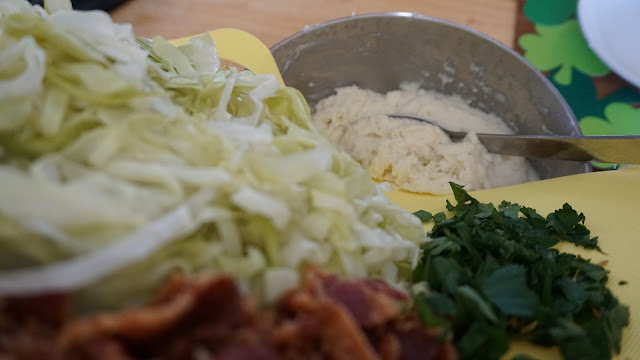 Combine bacon, cabbage, and parsley BY HAND. The cabbage will make a mess of the beaters. Go ahead and try it if you must, but don't say I didn't warn you. 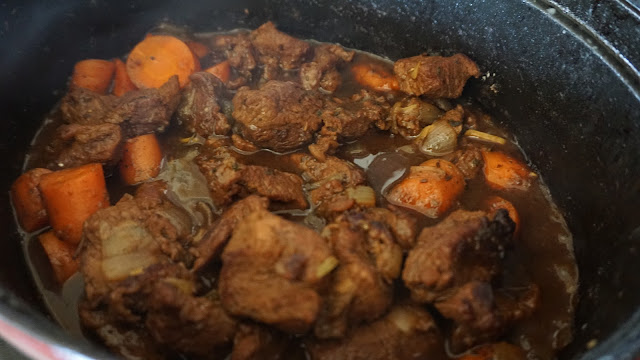 Remove the stew from the oven. 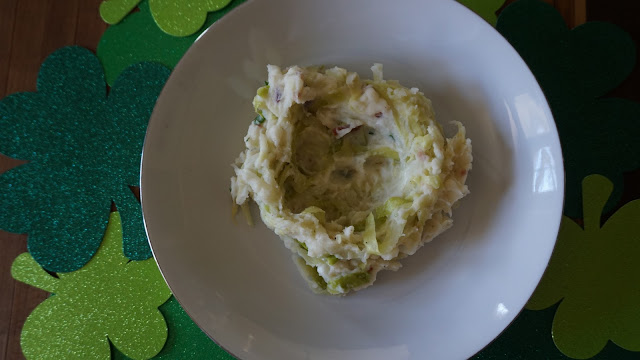 Make a bowl with the colcannon. 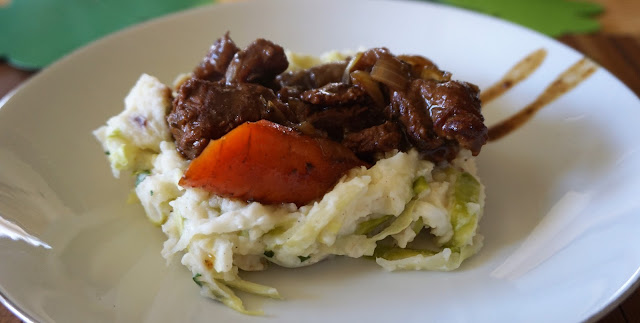 Fill it with Irish stew. Slainte!

Email ThisBlogThis!Share to TwitterShare to FacebookShare to Pinterest
Labels: Recipes