Look At That Swarm!

As we were getting into our car the other day, our neighbor, Bob, asked Kevin if he wanted to see the bees that are living in his lilac bush. We both got very excited, hoping they were honeybees. And they were.

It's been a year since we've had bees. I've really missed having their hum in my backyard. So have my gardens. My backyard is complete again. We quickly called Ed at Buckley's Homestead Supply. Ed has been a friend of ours for a long time. Kevin has worked on his cars, even before Accelerate Auto and Transmission was born. He is one of many that we are thankful for.

He quickly made his way over to our house, children in tow. He brought what he needed and I grabbed my camera. I apologize here. I am not a videographer or editor. The footage is rough, but the information is cool.

There was a good reason for our urgency. This is the time of year that bees swarm. When it happens, the hive splits and half leave their original home. It will then find a temporary home.


The bees will swarm around the queen, protecting her, until a new permanent home can be found. This will take place over the space of a few days, because they are at their most vulnerable at this point. The longer they are exposed, the greater their chance of dying.


Ed carefully cut the branch that the bees had swarmed on, and Kevin carried it half a block home.

After being offered the "shake, Kevin declined this time. Shaking those ladies into their new home wasn't something he wanted to do while wearing black. It's the worst thing you can wear around bees. They may have mistaken him for a predator (think bear). It was really brave of him to carry this swarm home to begin with.

It is a heavy swarm, and one misstep would have lost the whole thing. Even a bump would have disbursed them from the branch. He was so very graceful with these girls. I'm telling you, this is a LOT of bees! We're pretty sure that the queen is here, because she would be in the middle of this swarm. Also, when they were placed in the hive, the loose bees tried to get in to protect her. 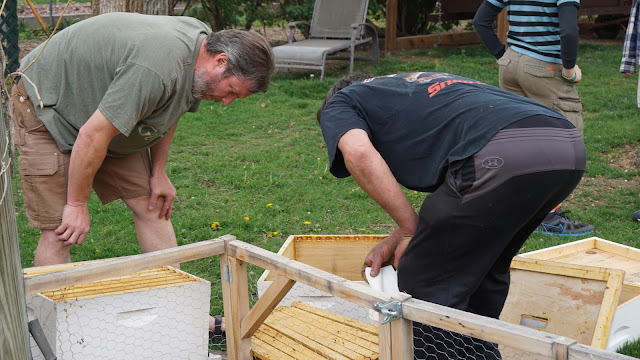 So Ed shook them in, and the bees were tucked in for a few days. We decided on a screen for ventilation on the separator board, with the lid propped on top. The loose bees took up residence under this lid. This is a good sign.

It rained soon after that. We left them trapped in the Langstroth hive for a few days. They were given a jar of simple syrup, they had ventilation, and it was time to settle in.

This was all on a Sunday. Wednesday morning I opened up the small entrance reducer, took the screen off of the separator board, and placed the top back on. This is what they did:


Exactly what I was hoping for. The girls are orienting to their environment. They will circle wider and wider and get their bearings in relation to their new home. As you can see, a few even found dandelions right outside their door.

We have a fountain in our yard, and if you look to the left in the video, you will see Lucy and her kids taking a dust bath in my (hopefully) 4 o' clock garden. Inside that little garden is a bee pond that I keep filled with water for the bees. As with chickens, water is a critical staple in their diets. I keep the bee pond full of rocks, because bees are clumsy little girls and bad swimmers.

You can see that neither Ed nor Kevin wore any protective gear. Ed is a pro at this. He owns Buckley's Homestead Supply. If you go there, tell them how much we appreciate them. They have a hive right outside the back door of the store, and chickens at home. They are a wealth of information, and even teach different classes of varying homesteading interests. They are the kind of people that you like to do business with, because you know they're just good people and love what they do.

Until you get to know bees, I suggest wearing protective gear. They don't want to sting you, because once they do, they die. They only sting when they are threatened. If you come upon a hive, give Ed a call for removal. His prices can't be beat. Don't try this yourself, unless you are a professional!!

I'll keep updating their progress as we go. For now, let's just hope that they like their new home enough to stay.