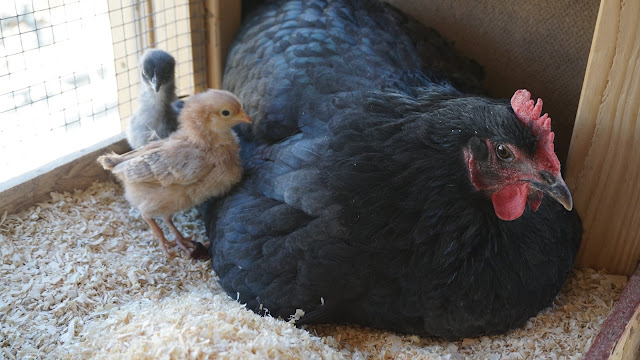 I've written a little bit about chicken math in my post I Keep Used Eggshells. I had alluded to the fact that I want two baby chicks this Spring. Possibly, sometime in April. In my own defense, chicken math is real, and I can honestly say I didn't plan this.. 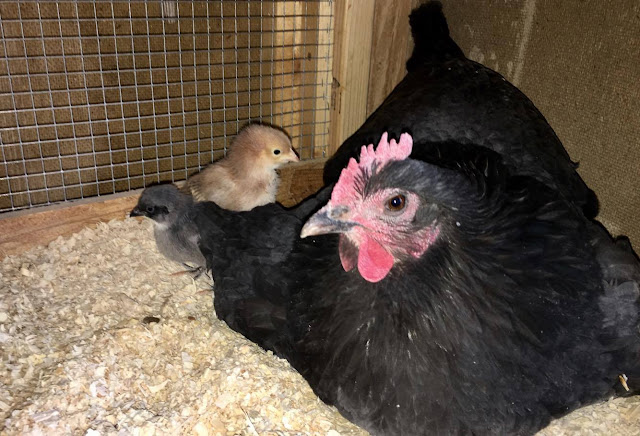 See, my Lucy has been broody. She's been broody before, and it's just heart-breaking to watch. She wants to be a mama so badly. She pulls her breast feathers out in an effort to be closer to her eggs. She wants to keep them warm. She sits on the nest, refusing to leave her charges. The only problem with that is that we don't have a rooster, so her eggs aren't fertile. They will never hatch. 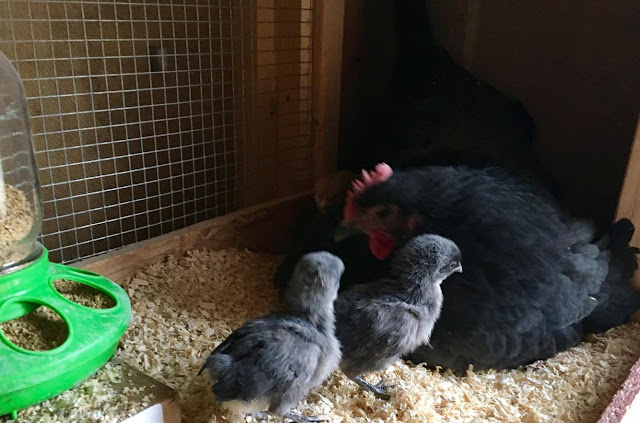 In the past, when she became broody, I made sure there were no eggs for her to sit on (I collected them as soon as they're laid). I made her stay outside with the other girls. This was supposeed to break her broodiness. They all free range, so they're used to being outside the coop. In fact, unless the weather is bad, they're only inside to lay eggs or roost at night.  Needless to say, she hated me during these times. She would pace back and forth in front of the coop, trying to get back in to sit on the nest. It was painful to watch. After a few days of this, she would finally give up. 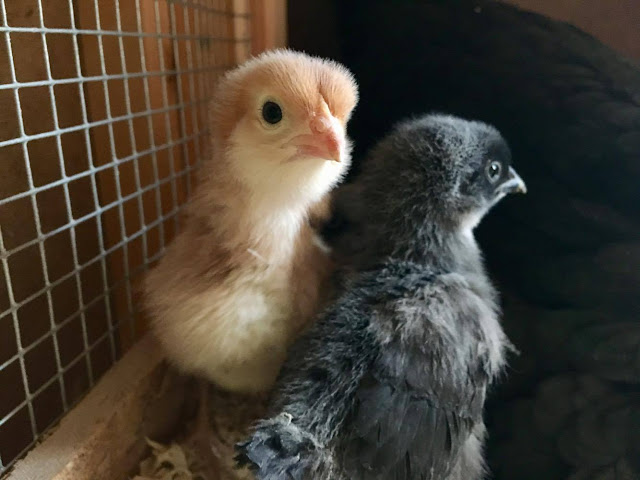 Lucy became broody again about a week ago. We went through a few heart-wrenching days of isolating her from the nest. She wasn't breaking easily this time. Then as luck would have it, I needed to go to Buckley's Homestead Supply for some pine shavings. Ed and Allison have educated me on chickens and bees from the get-go. They had baby chicks for sale, and it was the end of me. 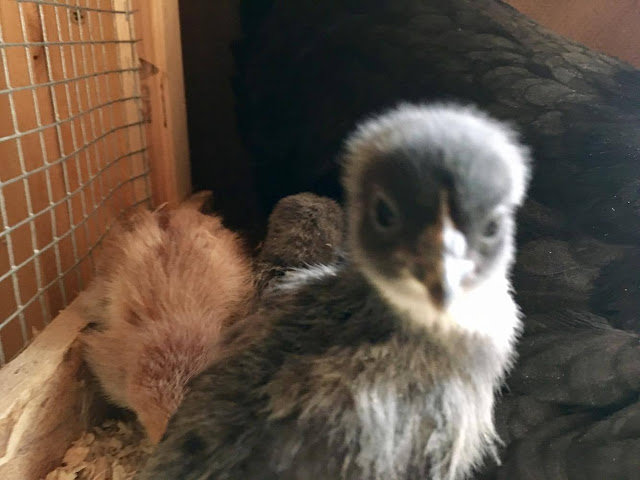 Have you ever been around a bunch of baby chicks? They are the cutest little things you've ever seen. I'm warning you, don't go look until you're prepared to take some home. It's called chicken math, and it's real. People afflicted with chicken math lose their ability to count. Fifty looks like fifteen. Three looks like two. 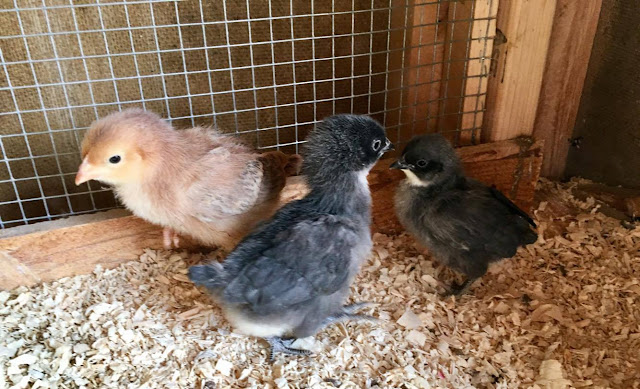 Aren't these two adorable? Anyway, as I am ooh-ing and awe-ing over the chicks, I mentioned that I was considering buying some fertile eggs to slip under Lucy so she could hatch them and finally be a mama. Little did I know that I could slip some live chicks under her, preferrably during the night, and she would probably take to them. She would think they were her own. They had all the answers. Of course, I took two home. Meet my new additions. Their names are Doris and Daisy. One is a Cherry Egger, and the other two are Jersey Giants. I haven't named the other chick yet, because I still think I only brought two home. I imagine as she grows that she will be named, and will have been part of the flock forever. I'm sure I won't actually remember when or where she came from, but I will love her as I do all of the others. 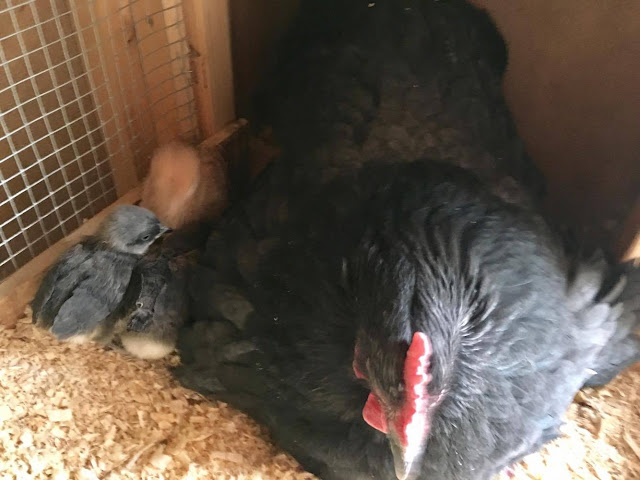 This is an extremely mild case of chicken math. I live in the city, so my limit is ten and roosters are a no-no (they like to wake people at the crack of dawn). I have heard of chicken math that reaches into the forties and more. Those people have it bad. 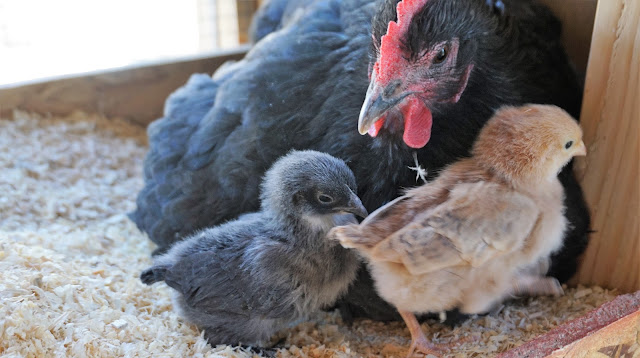 The only cure is prevention. If chicken math is to be avoided, one must never cuddle a baby chick, never go into the local Homestead Supply when there are chicks for sale, and never ever be around anyone who has access to chicks when you have a broody one. Seriously, don't even be around fertile eggs. 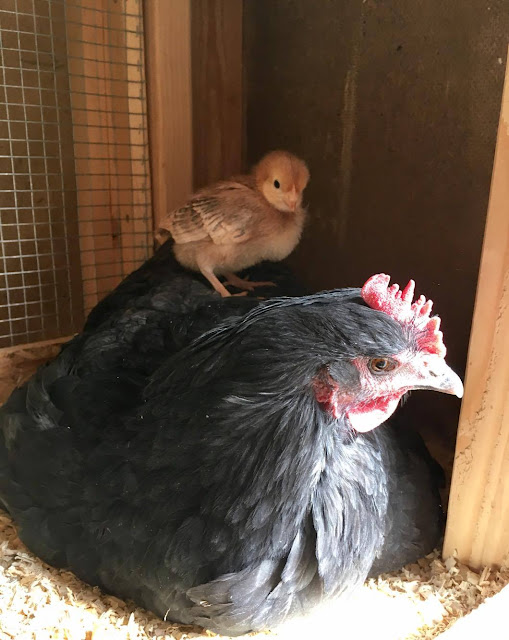 Despite it all, I have a happy mama that takes such good care of her babies. And the chicks look to Lucy as if she had hatched them herself.  I'm so thankful for this experience. These chicks are adorable, and I'm very proud of Lucy. I'm so thankful she finally got to be a mama. I'm also thankful my case of chicken math is mild. Seriously, I still have under my alotted ten. Although, I'm already thinking about next Spring.

Email ThisBlogThis!Share to TwitterShare to FacebookShare to Pinterest
Labels: Thoughts