Lent begins this week. That means Mardi Gras is coming to a close.
The celebration that started on the twelfth night of Christmas and ends with Margi Gras Day is also known as Shrove (Fat) Tuesday.This marks the beginning of the Lenten season for Catholics; the season when people do penance for their sins for forty days and forty nights.

Mardi Gras is associated with sinning, over-indulging, rich foods, decadence, dressing in costume, and loose morals. It's the last hoorah before the penitent season. There is a fascinating history as to why New Orleans is the capitol of Mardi Gras in the United States. A quick search on the internet provides a rich history of French explorers defending their claim to Lousiane, which now includes the states of Alabama, Louisiana, Mississippi, and eastern Texas. Look it up. It really is interesting!

I've not yet had a chance to visit New Orleans, but I remember my Aunt Judy and Uncle Jerry loved it. She was from a small town in Missouri and would tell me about the scenic road she would travel along the waterways, finally ending up in Tunica, Biloxi, and New Orleans. She was a southern belle; strong as steel and a beautiful, gentle flower. Uncle Jerry will always be remembered as a *raconteur. I love and miss their stories. When I think of how much change I have seen in my lifetime, I look to them as examples of how much change they had seen in theirs and the grace in which they acclimated.

One of my contributions to this festivity is gumbo. I don't use okra to thicken this gumbo. I use a small bit of  *file' at the end, only if I need it. What makes this recipe is the *roux. It's cooked low and slow, kind of how I imagine New Orleans to be. 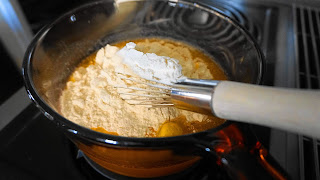 Add butter to a pot. I use glass because I find the roux cleans up better than in a metal pot. When the butter is melted, add flour. Cook on medium-low heat. Forever. Ok not forever, but it will feel like forever. Stir while cooking. Your arm will get tired. It's worth it. It may take an hour or more. Most likely it will take between half an hour and an hour. If you can stand it, cook it longer. The longer it cooks, the better it tastes. Don't burn it. Cook it low and slow until it browns into a rusty color. This is what makes the gumbo. Anyone can throw meat and vegetables into a pot and thicken it, but it takes patience to add the flavor that can't be found anywhere else than a good roux. 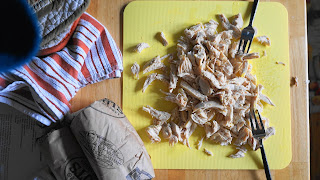 In another pot, add chicken and cover with enough water or chicken broth to boil. I'm always boiling chicken for one thing or another, so I keep reusing the same broth until I need it for something like this. It adds another depth of flavor. 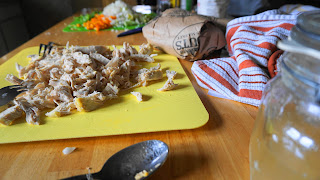 About thirty to forty-five minutes later remove the chicken, shred, and return to the pot along with the creole seasoning. 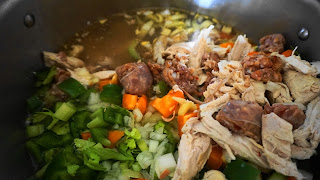 Chop the sausage and add it to the chicken. It adds dimension with smokiness. 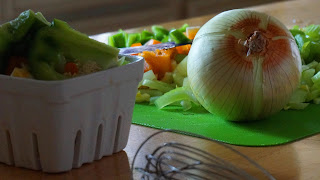 Coarse-dice the *Trinity. Add them to the pot. *Ca Viens? I'm telling you, the hardest part is the roux, which must be cooked to perfection. 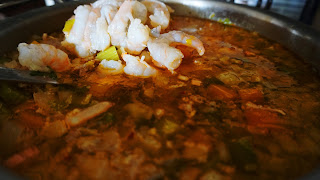 When the vegetables are tender, add the sausage and cook through, about 15 minutes. Add the shrimp. Shrimp will cook almost immediately, so be ready to add your roux. Add crushed dried peppers.

When your roux is rusty-brown, it's finished. Slowly thicken your soup by adding your hard-earned roux by the large spoonful into your pot, stirring as you add each spoonful. You don't want *gratin. Keep stirring with each spoonful. Cook for another twenty minutes to blend flavors. 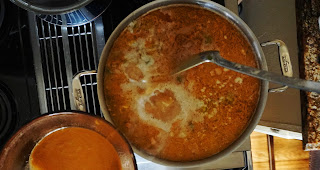 In the meantime, add rice and water together on high heat. When it boils, put a lid on it, lower the heat to the lowest setting, and set your timer for eighteen minutes. 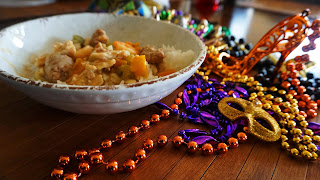 The rice and gumbo should be finished about the same time, so dig in. Place some rice into the bottom of a bowl and top it with gumbo. *Make the veiller and *laisssez les bon temp roulet!

Click Jambalaya for a little atmosphere while you're here.